The idea that robots should mimic the features of humans might seem unnecessary or even a gimmick. However because the world we’ve created around us is designed for human features (human height, two arms, two legs, fingers, etc.) it makes sense that giving robots similar features can help integrate them into our world in a useful way.

This is now becoming more feasible to do in the home and workplace – as robotics, sensors and software technology advances – and several technology companies are now appearing with robots that could be part of our daily lives in the near future. We’ve picked out some of our favourites examples.

Founded in 2013, 2Mar Robotics is an Australian start-up developing Jeva, a robot arm to help those with limited upper mobility. Mounted on a wheelchair, table or bench, the user can control the arm using an iPhone, iPad, Android phone or tablet, and two types of headset control interfaces, to move and grip objects. Applications include tasks such as pouring a drink, opening doors, signing your signature and feeding yourself. Tasks can also be saved to be repeated again later.

Cooking is the focus for UK-based Moley Robotics, which has created a robotic kitchen featuring an advanced, fully functional robot integrated into a professional kitchen unit. The hands, which use technology developed by UK-based Shadow Robot Company can pick up and interact with kitchen equipment such as blenders, whisks, knives and the hob.

The system works by using motion capture cameras to record the creation of a meal and the procedure can then be re-created any number of times by the robot. This opens up the possibility of an iTunes style library of dishes recorded by professional chefs and available to be recreated by anyone. Maybe the system could even help with dieting, “I’m sorry Dave, I’m afraid I can’t cook that…”

A similar cooking robot called PR2 is learning to prepare pancakes and pizzas by reading through WikiHow’s written directions. The system is part of a European project called RoboHow, which is exploring ways of teaching robots to understand language. 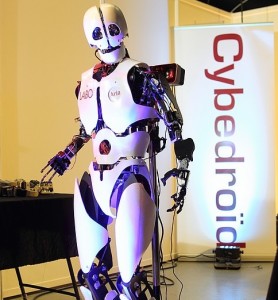 There are also increasingly advanced humanoid robots that could assist in the home. French start-up Cybedroid believes that within five years it will be possible to integrate robots into family environments for personal assistance. These could provide support for practical tasks, such as picking up objects, carrying trays, and opening doors, but also to act as a companion. Humans would be able to interact with them by the voice and gestures, and they would learn from our habits and direct orders.

Perhaps a little work is required on the asthetics, but it seems like it may not be long before  human-like robots become a part of our everyday lives.

To find out about more innovative robotics companies you can check out the VentureRadar database.