A hydrophobic material is one that repels water.  Inspiration for these materials tends to come from nature – for a long time the best hydrophobic materials worked on the same principle that allow lotus leaves to float on water without becoming waterlogged (the leaves have a rough surface that minimises the contact area between the liquid and solid).  More recently, new materials have been developed by re-creating the nanopatterns on the wings of the Morpho butterfly which allow them to fly through rain undisturbed. 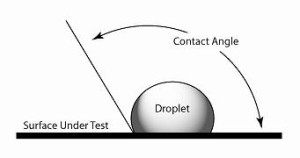 Hydrophobic surfaces are generally produced in one of two ways. The material can be imbued with the desired properties directly during the manufacturing process, or liquid or powder coating can be applied to a surface post-hoc. Supplied in spray bottles by companies like NeverWet, hydrophobic and super-hydrophobic coatings have many general consumer applications, such as waterproofing shoes and clothing, creating self-cleaning windshields or bathrooms, and protecting outdoor metalwork from rust. NeverWet claims that items with their coating applied have been submerged in seawater for more than a year and still emerged bone dry.

Consumer electronics also stand to gain from hydrophobic coatings. Instead of buying a bulky waterproof case for a smart phone or tablet, conscientious gadget owners can send them off to companies such as Liquipel for a hydrophobic coating which protects against “accidental spills, splashes and brief shallow submersion”. The company uses a specially designed machine to create a vacuum around the device, pump in a special formulation as a gas, then introduce plasma, causing the material to form an impenetrable and invisible seal. Testing the efficacy of this process looks incredibly enjoyable, not to mention thorough:

There are also a whole host of uses for hydrophobic materials in manufacturing and industry. For example, LiquiGlide’s technology allows companies to create food packaging where every last drop can be used, so there’s no more wasted ketchup or mayonnaise. The results are seriously impressive, as can be seen in the video below:

One of the most exciting applications of hydrophobic materials can be found in the energy industry. Roughly 85% of the worlds power is currently generated in steam power plants, where a key part of the process involves the steam condensing on metal pipes with a water coolant pumping through them. The efficiency of this condensing stage can be dramatically increased by making the surface of the pipes hydrophobic. However, the conditions inside the condenser make this a very difficult task. If the hydrophobic coating is too thin it wears away very quickly and needs to be replaced too often to be economical, but if it is too thick the steam doesn’t condense as effectively, defeating the entire point of the coating.

Luckily, a collaboration between two MIT Research Labs has produced DropWise, an innovative new coating that is both thin enough and robust enough to get the job done. Increasing the efficiency of the condenser means that much less coolant water has to be pumped through the pipes, which becomes a really big deal when you realise that power utilities are the world’s second largest consumer of water. Less water needing to be cooled also means less CO2 is emitted from the plants – DropWise claims that using its product in every power plant condenser could reduce CO2 emissions by more than the entire solar and wind power industries combined.

It’s easy to see that hydrophobic materials have many serious and varied applications – and excitingly, there is still potential for more advanced hydrophobic materials. Professor Kripa Varanasi, one of the minds behind both DropWise and LiquidGlide, believes that a further 70-80% increase in hydrophobic efficiency is still achievable.

You can use VentureRadar to keep track of all the emerging developers of hydrophobic materials.